Good practices in CP: 63. Utilization of the waste from the production of nonwoven fluffy fabric as a full-value input material (Pureko Sp. z o.o.) 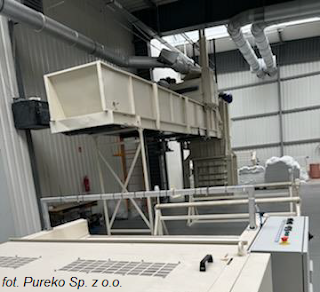 Example No. 63
Utilization of the waste from the production of nonwoven fluffy fabric as a full-value input material

Cost (implementation of good practice): High
(approx. PLN 261,000, including the cost of purchased equipment: approx. PLN 240,000)
Description of the problem:
For years, the company had been looking for opportunities to reuse the waste generated during the production of nonwoven fluffy fabrics (mainly used in the furniture, textile and clothing industries).
Until now, some of the waste generated was stored and then transported to an external company, where it was defibrated and then transported back to Pureko for use in production. The process consumed a lot of time, required a lot of storage space and additional transportation (the waste described here is light, but takes up a lot of space); it also negatively affected workplace safety (problems with keeping the workstations clean).
Waste generated during the production of low-weight fluffy nonwoven fabrics and nonwoven fabrics that were soiled due to their transportation were handed over for disposal.

Applied solution:
The company developed and built a technological line for nonwoven fluffy waste defibration, which gave it the ability to process the resulting waste and use 100% of it, as a full-value input material, without having to store and transport it to an external company.
The work was initiated with the construction of a simplified prototype defibration line. With this solution, with a small outlay, it was possible to verify the effectiveness of the assumptions made and test various configurations.
The project included the purchase of a defibrator, a transfer fan, pipelines to transport pneumatically defibrated waste, diffusers, a buffer conveyor belt and an automatic packing press. At present, the production waste is being further processed on an ongoing basis, resulting, for example, in cleanliness around the line (no storage of the waste generated at the line, the waste is being defibrated on an ongoing basis). The investment in an automatic press has reduced the need for storage space and transportation in relation to the secondary raw material received. 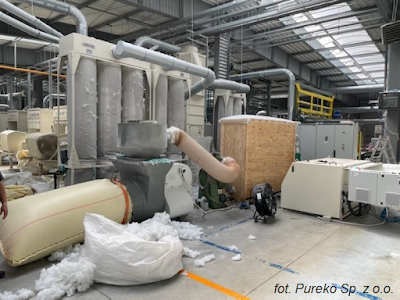 The prototype of a defibration line on which the technological tests were performed
photo by Pureko Sp. z o.o. 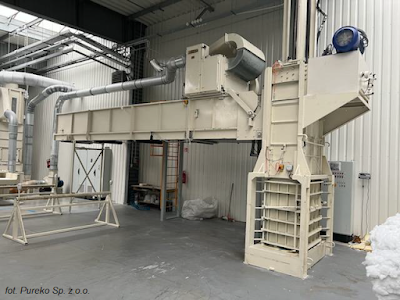 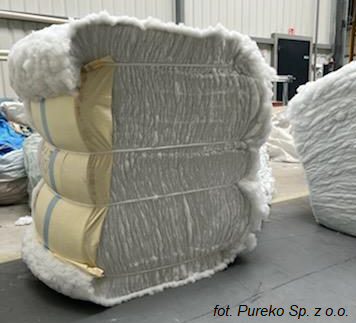